Weight timeline from 16th of December to now

This post was meant to be all about my fitness and health; however, I’ve had to shift this towards a more distracting matter. It’s to do with living in a house share. I have mentioned this issue in specifics in an article entitled “5 Reasons Why I Hate House Sharing” and this is mainly to do with the internet being so fucking slow. It’s driving me crazy and I’m seriously going to rip the heart of the person in the next room downloading shit. (Not really)

Now that I’ve got that out of my system, I’ll be sharing my fitness progress so far. This will be a sort of collaborative post with the post that I wrote before called “New fitness routine at the gym + I now weigh 72kg“. In that post I uploaded an image that showed that I weighed 72 kg, and this was when I first started at the gym. I’ve been doing quite the routine with resistance training being at the core of it all and I’ve in fact put on weight as a result; I’m hoping that more muscle has been gained than fat. But at 72kg and at 6ft tall, I was getting weigh (See what I did there?) too skinny, so I decided to do something about it. You can see my full fitness routine in that link above. 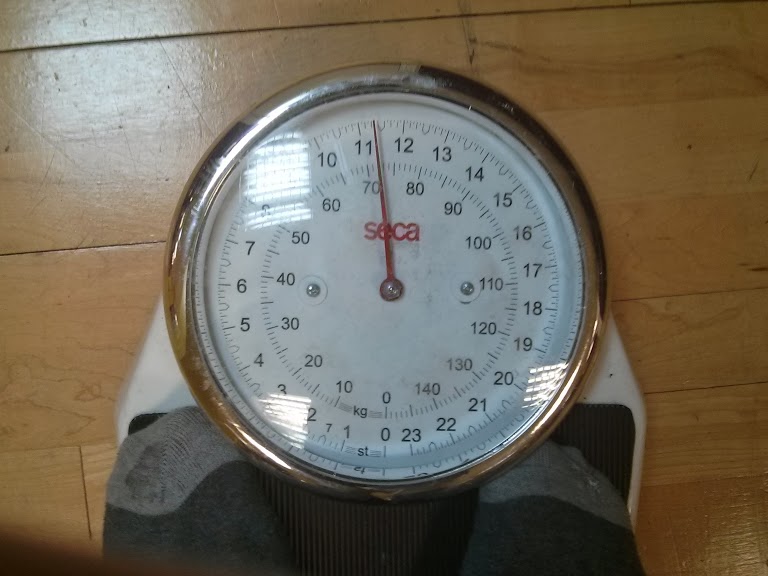 Boom! I weigh in at almost 12 stones. I’m quite proud of this as I know most of this gained weight is muscle weight… or so I hope. It’s been around 3 years since I started my weight loss journey, and I’m now really starting to feel the effects of it all. To think that I used to weigh 110kg/17 stones/238lbs, and to also think I’ve gone all the way down to 72kg/11 stones is just absurd in my eyes.

Feelin’ good about myself.